Hadoop is a software platform to manage and mine large datasets, by allowing users of commodity servers access massively parallel computing.

HDFS manages data storage and administration. HDFS divides files into blocks of data, typically 64MB in size, then stores them across a cluster of data nodes. Any data task can then be performed over many large files stored on many machines. This eliminates many traditional limits on data processing including allowing for dramatic increases in data capacity.

MapReduce is Hadoop’s main data processing framework, written in Java. To see how it works, imagine counting Irish authors in a library. MapReduce would delegate shelves to team members (i.e. divide data into blocks) who count Irish authors within their assigned shelves (the Mapper process). The workers then get together to add up their results (the Reducer process).

As Java MapReduce can be complex, Apache have added projects to simplify its use. Streaming runs MapReduce scripts languages other than Java, Hive runs SQL-like queries in Hadoop while Pig performs SQL-like operations in a procedural language that users of R and Python might be more comfortable with.

These are only some of the projects available and companies continue to find other ways to simplify the use of Hadoop such as online tools like Amazon’s AWS service, which includes S3 file storage (a similar file system to HDFS) and their Elastic MapReduce platform.

Hadoop enables a solution that is:

The above issues are being tackled as Hadoop develops and, in particular, Impala’s developers are aiming to make Impala very usable for more traditional database tasks such as business intelligence applications.

Examples of Commercial Uses of Hadoop

Hadoop can be used for automated marketing, fraud prevention and detection, analysis of social network sites and relationships, in-store behaviour analysis in retail and marketing via 3G based on mobile device location. Hadoop is used by many leading-edge Internet companies such as Google, Yahoo, Facebook and Amazon.

Twitter have found that they can’t reliably write to a traditional hard drive given the sheer amount of data it stores – 12TB per day as of September 2010[2]. In addition, they use Pig scripts as SQL can’t perform operations of the scale they require[3].

Data is downloaded from the website of the Carbon Dioxide Information Analysis Center[4], showing cloud and illuminescence data from land weather stations and ocean observation decks around the globe.

Files cover the period 1 December 1981 to 30 November 1991 with 2 files per month (1 for land observations and 1 for ocean observations) totalling 240 files (10 years x 12 months x 2 files). This is a perfect example where using Hadoop is helpful for data mining.

Each file has a number of weather observations – each line is a 56 character weather report. As per the documentation associated with the dataset[5], key items within each report are as follows:

Using the documentation and R’s substr function we can write code in R to extract key values. For example, to extract the date we could run the following code:

Although the Cloud Weather dataset is large (c. 2GB) it wouldn’t be considered as “Big Data”, and indeed software such as PostgresSQL[6] and Pandas[7] exist that can handle such datasets. Nevertheless, this is a good example for illustrating how to use Hadoop.

An example of a program we might want to run is to evaluate the percentage of reports that pass the illuminescence criterion. If we were using one file, this could be done using the following R script:

However, as files get larger, the R script gets slower. This is for similar reasons to why opening very large files in standard text editors is slow. Hadoop can handle such a task in a better way as HDFS adapts to changes in data structure and can take multiple files as input.

In MapReduce, we can form a solution similar to the example of counting Irish authors that we had in Part 1. In effect what we are trying is the equivalent of a SQL GROUP BY and SUM query to get totals for pass and fail. We do so with the following steps:

The following is the R script for the Mapper:

Before presenting the Reducer script, it is instructive to first look at the effect of the Shuffle phase. For instance suppose Map output (in key, value pairs) is as follows:

Then after the Shuffle phase it is sorted as follows:

Now all the pass and fail keys are together in the output. The totals of pass and fail can be added up without additional variables in our script, with the following procedure:

This is the Reducer procedure as an R script:

The above map/reduce scripting concept can be used for other cloud features e.g. getting a frequency histogram of lower cloud types is possible with the following Mapper script:

and then using the same Reducer script from the previous example. The output of this MapReduce job can be read in R using the strsplit function to parse the values vector C_l, from which a histogram can be generated.

Exporting files to Amazon S3, Amazon’s Elastic MapReduce platform (which includes Streaming) offers the opportunity to use the above approach to make several observations.

We note that cases of missing cloud data (Total Cloud Cover of -1) and obscured skies (Total Cloud Cover of 9) were removed before publishing online and hence are not in the graph on the left. Otherwise the 2 graphs are proportionally similar. We see the same result for all other cloud features, indicating the MapReduce algorithms are working correctly.

Using the documentation and the values of month, present_weather and latitude it is possible to show monthly precipitation trends.

However, more interesting results are seen in tropical and arctic/antarctic regions. In tropical regions, more precipitation is seen during summer months, which appears to be because of the effect convectional rain has on precipitation levels[8]. Indeed the following plots of monthly precipitation in equatorial regions show this trend:

In arctic/antarctic regions, there is no clear seasonal effect on precipitation levels:

Precipitation Across the United Kingdom & Ireland

In R the if clause if(grepl(“03”, stat_deck)) filters stations in the United Kingdom and Ireland, where stat_deck <- as.integer(substr(line,20,24) is the weather station code. The following plot of UK precipitation levels shows a similar trend to that seen globally in the region between latitudes of 45 to 60 degrees North. 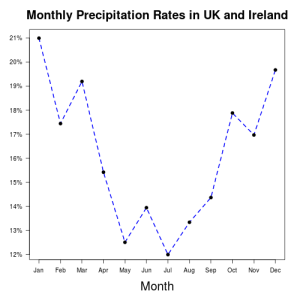 One thought on “Cloud Weather Reporting with R and Hadoop”